Calling her “maal” or just "appreciating" her beauty? You are an eve-teaser too, my friend! 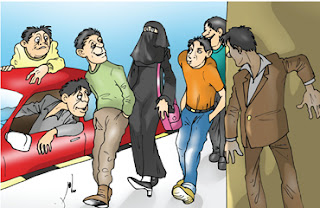 Following the tragic incident of gang-rape in Delhi, popularly known as the “Damini gang-rape case”, there have been mass-protests across the nation. The social networking sites, more specifically Facebook, has not only played a phenomenal role in mobilizing the youth but has also served as an indispensible container for expressing anger. The crowds and status updates, shared photos and links indicate a significant contribution by the men folk. This is not to say that all men are rapists or potential rapists. This is also not to say that all men are eve-teasers or must have eve-teased someone. But there are and have been many men (Here, I give a personal reference and say I know them. This is to emphasise that this is not an assumption) who do “eve-tease” and status updates by them condemning these acts has come as a shock. Another shocking fact is that there have been cases of molestation in some public demonstrations as well (I am not talking about policemen). For some, It can be argued that going to these protests or supporting them is another way to woo women or gain their trust but for others, I think it is because they are unaware of their own acts. This may be also because rape is a “crime” while eve-teasing is not such a “big-deal”? Maybe! In this article, I plan to identify and define “eve-teasing” for these men and some of my acquaintances and also burst some of their myths about eve-teasing.

What is eve-teasing? Eve-teasing is something that happens in public spaces, in bus, metro, auto rickshaw or on streets? It involves whistling or passing lewd comments, generally to women who are strangers?

This is an incomplete answer. Eve-teasing is alone done in colleges, by people we know, our classmates, friends, colleagues or anyone. It involves staring at a woman in an improper way and at improper places. Most men are accused of staring at a woman’s breast, most do when women are not looking at them and some even do in front of them!

It involves “complimenting” someone’s beauty when they just don’t like it.  Calling a woman “pretty”, “cute”, “sweet” or whatever against her will is uncomforting for her and is definitely not taken as a compliment!

Most women also don’t like to be called “hot” or “sexy” or being told how good or “perfect” their figure is. You know why? Because they are not supposed to be seen as objects of lust and desire!

So eve-teasing is not restricted to a small section of people on streets or public transport. Also, eve teasing is not just passing a comment. For a man, it must be just passing a horrible comment which shows his own standard but for a woman, that one-line is enough to humiliate her, create a sense of fear, make her feel disgusted about her own self and cause depression. A girl can never forget any instance of eve-teasing. Somehow, she can never forget it. And no act is small or big!

Re-think before you say you “respect” woman. If you have to respect something, respect her identity. Don’t respect her as an object of your lust and desire. Respect her as an equal human being, capable with the same intellectual level.
Posted by Unknown at 4:49 PM

Email ThisBlogThis!Share to TwitterShare to FacebookShare to Pinterest
Labels: feminism